A couple of years ago, I went to an AAU show in downtown Los Angeles. I used to enjoy waiting to see what new men would make their appearance in the local meet. No matter how great the present champs are, there is always someone climbing up the ladder to become tomorrow’s hero. As the house lights darkened a hush fell over the audience and the contest began. There were the usual oldtimers who picked up fringe trophies year after year and there was a sprinkling of new boys to make the show entertaining.

Then they announced the name Ed Corney.

On the pedestal jumped a sun-bronzed athlete who made everyone sit up. It wasn’t that his arms were so large or that his abs were so well defined or that his legs were so well balanced. What made most of the audience so impressed was he had so many good things placed in just the right places. To put the icing on the cake, he was able to display this in the most artistic posing routine I had seen in Years.

Often a bodybuilder will think a posing routine is great if it’s weird. I’ve seen them get into all kinds of contorted positions and twirl around like a ballet dancer in a n effort to dazzle with movements and obscure the vacuum left by the muscles they don’t have.

This wasn’t the case with Corney. He had the ammunition and he knew how to deliver it. Of all the men who appeared in the contest that evening, he was the one I remember. I couldn’t tell you who won the event, but I sure remember Ed Corney.

Ed is on of the late starters. He didn’t begin serious weight training until he was twenty-five years old, and he didn’t enter his first physique contest until almost ten years after that. Fortunately he’s made up for lost time. Ed is the kind of person who takes his time in deciding a course of action, but when he does decide, he clamps on and rides to the end of the line.

Born and raised in Hawaii, he eventually moved to Northern California. It was there he met Millard Williamson and the course of his life was changed. Williamson is one of the best physique men in that part of the country. It’s little wonder Ed was astounded when he first saw him. One of Corney’s favorite sports is volleyball. It also happens to be the favorite of Williamson. After a game they played, Ed introduced himself to the man he had been playing against just a few minutes before.

“I’ve never seen muscle like yours,” said Ed. “Did you get it from training with weights?”

“That’s right”, replied Williamson. “Weights are the fastest and most complete way of developing muscle ever devised.”

“I always thought that weights would slow you down, but you’re one of the best volleyball players I’ve ever seen.”

Williamson looked astonished. “Weights don’t slow you down. In fact, proper weight training and nutrition only make you faster and better coordinated.”

Corney couldn’t argue with what he had seen with his own eyes.

In the days that followed Ed kept thinking how he too would like to have muscles like Williamson. Why couldn’t he? After all he had the proper number of arms and legs. What was to keep him from building them the way he wanted to? With this idea in mind, Ed became a man of great physical purpose. Under the tutelage of Williamson, Ed’s great natural potential began to assert itself. For years it began to assert itself. In fact, it asserted itself so much that people began to wonder why this physical phenomenon didn’t enter any shows.

Ed always responded that he wanted to train only for health and appearance and not for the cups he could win. Still his naturally competitive spirit kept digging on his biceps and urging him to get in there and try the waters of bodybuilding competition.

The right moment seemed to arrive. The year was 1967 and they were holding the Mr. Fremont contest in the Central California area. The pressure mounted and at last Ed Corney entered his first event. He won the title handily and the taste of victory whetted his appetite for more.

With each contest his posing routine has improved along with his physique. Ed feels the presentation of his physique is almost as important as what he presents. With Clarence Ross, one of the great posers of all time, teaching him the art of physical display, he was bound to come out a winner.

Recently Ed came to another major crossroad in his life. He placed fourth in the 1971 AAU Mr. America contest. Was this to be his lot? Did a man of thirty-seven have to spend years of apprenticeship before he would be allowed to win the big title? One evening he decided to call Arnold and get his suggestions. The Oak let Ed know in no uncertain terms the wave of the future of bodybuilding rested in the hands of the IFBB. This was the deciding factor. Now he was read to enter the big leagues. He would enter the IFBB Mr. America contest.

As on of the judges, I heard of Corney’s entry and looked forward to his posing at the prejudging. I was not to be disappointed. Ed stands about five feet , five inches tall and usually tips the scales at 170 pounds. At that height and weight he sports eighteen-inch arms, a forty-four-inch chest, thirty-inch waist, sixteen-inch neck, twenty-four-inch thighs and sixteen-inch calves. He has bench pressed 400, squatted with 485 and deadlifted 500.

This combination of power and physique, along with his fantastic posing routine, makes him one of the most formidable Mr. America contestants around. Time and again the judges asked Ed to come back and pose with the others so we could get a comparison. He never suffered by this comparison with any of the contestants no what the height.

The evening of the show was filled with all the excitement that only a major event like this can generate. People milled around in the lobby of the Aquarius theater talking about their favorites. I was surprised to hear the name of Ed Corney so much. In the space of a very few years he had become quite well known to the bodybuilding public. He knw this and wanted to create the best impression possible. As a result he trained harder for his entry into the IFBB than he ever had for any other event. For two weeks before the show Ed trained three times a day every day of the week. He was determined to be in the best shape of his life.

The moment his name was announced and the music swelled, I knew the audience was in for a treat. He almost stole the show from some of the greatest names in the sport of bodybuilding. Before he left that night he was to claim third spot in the Mr. America contest and Most Muscular in his height class, along with the overall Most Symmetrical award and the Best Poser title.

This was a tremendous step for Ed, but he wasn’t satisfied. His competitive spirit ws now at full steam. The decision was made to enter the Mr. USA contest in New York City, and Ed went back into concentrated training. Ed faced a most formidable group of men in New York – Harold Poole, Charlie Fautz, Leon Brown, John Biancolli, John Maldonado.

The show was the high point of Ed’s career and his hard training and polished display overwhelmed the audience and the judges. Although a relative unknown just a year before, he carried off the Mr. USA crown, the Best Arms, Best Legs and Best Power trophies.

Quite a night for the Hawaiian star, but those who have seen him in action feel it’s only the beginning. 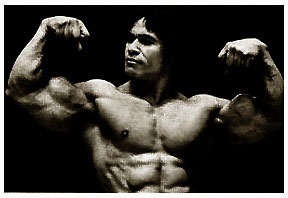