Depending on the number of people in the gym after his regular workout, Ed Corney might practice his posing routine. With the music turned down low, he goes through the series of dynamic poses that he will present at the Mr. Olympia contest. Ed considers it a good idea to do his posing immediately following his workout, when he is somewhat fatigued and still pumped up. After all, he reckons, you’ll have to pump up before going on stage on the day of the contest. You’ll be tired from your efforts in the warm-up room. So what’s the point in practicing your posing routine when you are fresh and relaxed? “Besides,” he notes, “posing after your workout, holding each pose for a count of three to five, will amount to isometric exercise and that’s fine for bringing out muscle separations.” Ed Corney’s favorite music for posing is “My Way”. But he sometimes poses to “Exodus”, just for a change of pace.

So this is the training routine of one of bodybuilding’s most popular champions. Certainly one of the greatest physique men in competition today. At 45 years of age, Ed is proof enough that regular barbell exercise can keep a man young in mind and body. He considers all exercise good. And the key to success, bodybuilding or otherwise, “lies in the head. That a man’s mental approach dictates his future.” He uses the forced reps principle, as advocated by Mike Mentzer in the preceding chapter, but with one significant difference. Ed Corney does not work with training partners. He returns a weight to the rack only when he is satisfied he cannot squeeze out another repetition. Ed has found that 174 pounds is his ideal competition body weight. When he goes over that figure he tends to lose his edge. His intercostals and serratus are not quite as sharp.

Ed Corney is particularly famous for his posing ability. It turns out that he practises regularly before specially rigged mirrors, and to the music he will use at any given performance.

Finally, he says that “when the day comes that I feel completely satisfied with the way I look then that’ll be the day , I quit competing. For unless you have a goal, unless you have a good reason to go to that gym day in and day out ” you’re lost. I will always be seeking to improve myself and that is why I always listen to constructive criticism!” There’s a great head on Ed Corney’s massive shoulders. 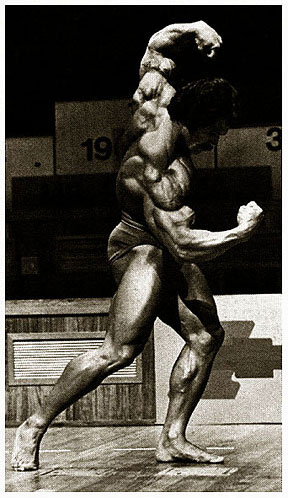