The Sunday Ed Corney held his clinic at the Olympus Spa, I watched in amazement as he lost himself in what he was doing. Before fifty or sixty pairs of adulating eyes, he appeared to hypnotize himself during each exercise, He was performing concentration curls: Boom!.,. Boom! , . . Boom! . . . went the action, his biceps tensing, stretching, rising to a peak with the upward movement of the forearm, splitting. . . And all the while Corney is mumbling enthusiastically to himself, sinking deeper and deeper into his self-induced trance. I move in closer to catch the mumbo-jumbo. The arm moves up and he says, “Love it, ahhhh . . . Love it . . .” the dumbbell is lowered, starts up again, “Love it, ahhhh . ..” So it goes until he has performed ten repetitions of the exercise. Then he drops the weight, picks it up with the other hand. treats it similarly, mumbo-jumbo and all, then drops the weight on the tenth repetition to the carpeted floor. “Oh,” he says euphorically, “oh, I love it!”

Later, when I ask about this strange ritual of love he says, “You really have to look forward to each training session if you want to get the most out of it. When Arnold says the pump is like cuming he is not far wrong. You have to look forward to your workouts at the gym, as if it were good sex; you have to live for your training and forget everything else the moment you walk into your gymnasium. . . It’s the only way to productive bodybuilding that I know. “Believe me. you won’t catch Arnold joking during a training period. He sets himself goals in advance of picking up the weight for his first exercise. What he says he’ll do, bet on it, he will do. It is no accident that Arnold Schwarzenegger is the greatest bodybuilder of all time. I’ve lived with him. I trained with him for three months and learned that the connection between body and mind must never be underestimated, particularly when it comes to championship training!”

Ed Corney demonstrated the proper performance of a number or basic weight training exercises. He likes to handle heavy poundages in his workouts but only if they allow him to squeeze out a certain number of repetitions in what he considers good training style. 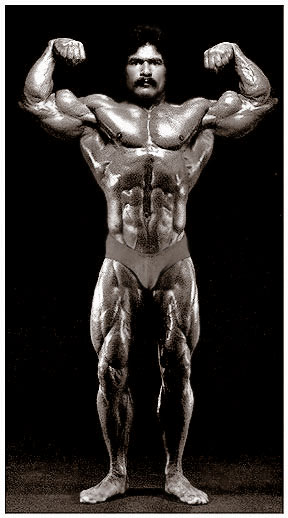