What follows is an account of a seminar that Ed gave at The Olympus Gym in Warrington, Pennsylvania in 1977. It was written by George Snyder and Rick Wayne in a long since out of print book called “3 More Reps”.

So now, there he was, Ed Corney, fresh from causing a near breach of the peace in Columbus, Ohio, a couple weeks before, looking pretty well preserved for a man putitively well into middle-age. He said he was looking forward to meeting the people of Warrington at his clinic the next day.

Corney and I retired to the office to chew the fat over cans of liquid protein. For a man who was that month’s main bodybuilding topic, all because of audience reaction to his presentation at the 1977 Mr. Olympia contest, Corney seemed remarkably ordinary. Which is to say he did not behave like some of the Mr. Nothing prima donnas one encounters every now and again in this sport of ours. Ed seemed a modest man, cool in the Bill Pearl tradition.

When I brought up the matter of the overwhelming Mr. Olympia ovation he merely shrugged his massive deltoids and waved the subject off with his right hand. I told him what Reg Park had said, that never before in his long bodybuilding life had he witnessed similar spontaneous audience reaction. Indeed, Reg has on occasion brought even blase London Palladium audiences to their feet after spellbinding displays of muscle, and yet he told me that at one point during Corney’s presentation he thought the audience would storm the stage. “Can you believe four thousand excited people on their feet screaming Cor-nee, Cor-nee, Cor-nee? I tell you it was downright frightening. . . I was about to exit stage right. You can believe that!”. Still Corney seemed unmoved: “You get used to that sort of thing after a while,” he said. Not that he was being overly nonchalant for effect. He seemed to mean every word as he went on: “For some time now I have been getting that sort of audience reaction to my posing wherever I appear. But you have to keep your head, you can’t lose your sense of proportion. Oh, it is gratifying. . . and I am grateful. But there are other things in life. If you aren’t careful you can find yourself getting so hung up on that sort of thing. . . hey, it can get like dope which is addictive and a killer. Besides, I didn’t win, did I? Frank Zane is Mr. Olympia 1977.”

Still, Ed Corney has himself been a winner many rimes. He is Mr. America and Mr. Universe too. And there are a whole number of other awards that have come his way on account of his superior physique development. *

* Ed also received a five minute standing ovation after his posing routine at the 1994 Maters Olympia. 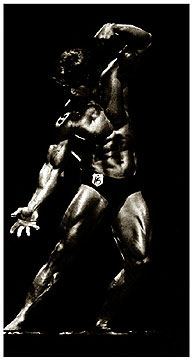 “M.C. Reg Park mistakenly announced Ed Corney as second and had to correct himself and announce Robby Robinson as the second place winner instead. Corney, however, saved everyone considerable embarrasment by graciously handing the second place asward over to Robby with a grin and a hug, showing class and style that many of the other contestants would have done well to emulate” – Muscle Digest Magazine