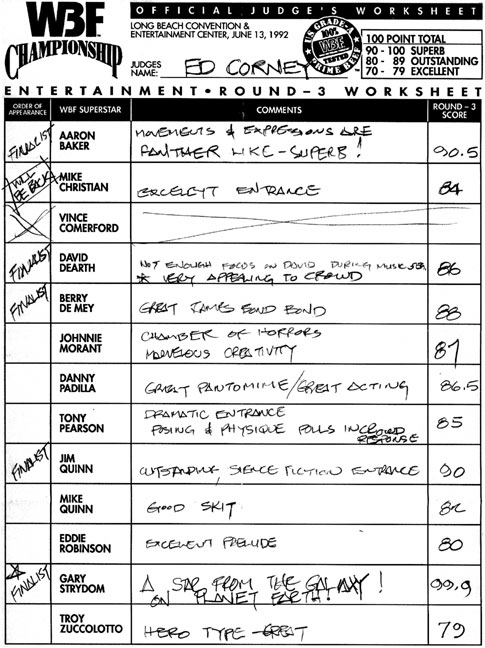 Ed’s judging worksheet for round three of the show . . . the “Entertainment Round”

Vince McMahon created the WBF as competition to the long established International Federation of Bodybuilders (IFBB).

The magazine secured a booth at the IFBB Mr. Olympia contest held on September 15, 1990 in Chicago, IL. At the conclusion of that competition, the booth handed out press releases announcing the WBF’s formation. The press release stated that the WBF would “revamp professional bodybuilding with dramatic new events and the richest prize money in the history of the sport.” It also mentioned that Tom Platz would be Director of Talent Development for the organization.

The first competition aired June 15, 1991 live on pay per view from Atlantic City, NJ and was met with mixed reviews. Critics noted the WBF’s attempt at developing characters for each BodyStar went against Vince McMahon’s initial promise to keep professional wrestling away from bodybuilding. To promote the show, both the WBF BodyStars and the WWF Superstars appeared on a series of Family Feud episodes. Regis Philbin was brought in to co-host the event with McMahon and Bobby Heenan.

It was announced in a private meeting with BodyStars that because Vince McMahon was under federal suspicion for steroid distribution, the second competition would have to be drug-free. Former television personality and bodybuilder Lou Ferrigno had just signed with the WBF and immediately left the company upon hearing this news.
Many BodyStars were unable to get their bodies clean before the June 1992 competition in Long Beach, CA that aired live on pay per view. It resulted in the physiques of several competitors appearing less than acceptable. This damaged McMahon’s reputation in the eyes of the bodybuilding community. Professional wrestler Lex Luger was scheduled to compete on this show as a guest performer, but was involved in a motorcycle accident prior to the event. He was instead interviewed via satellite during the live pay per view broadcast.

Vince McMahon called the owners of IFBB on July 15, 1992 and announced the WBF was disbanding.