Every few years some outstanding bodybuilder will appear on the California scene and win virtually every major physique contest in sight.

Ed Corney, who hails from Fremont, California, is the latest in this series of physique champions. Ed’s victories, in addition to Mr. Pacific Coast, include Mr. Western America, Mr. Western U.S.A., and Mr. Northern California, Mr. Iron Man and nearly a dozen other physique titles.

An all-around athlete, Corney also excels in judo (black belt), surfing and water skiing as well as competitive power lifting. It was while playing league volleyball at a Y.M.C.A. about 10 years ago that the iron bug first bit Ed. It seems that several of the players on Ed’s team were enthusiastic bodybuilders and they lost no time in getting Ed started on a program of progressive weight training.

Although Ed is a dedicated bodybuilder who trains seriously for several hours each week, he believes that the maintenance of a balanced home life is of equal importance. Therefore, it would not be unusual on a typical weekend to find him and his lovely wife, Lois, enjoying the sun and surf at one of Northern California’s beautiful ocean beaches. Lois, who is a graduate home economist, takes a special interest in Ed’s diet, preparing nutritious, hi-protein meals, which frequently include broiled steak as well as other appetizing natural foods. Ed tries to avoid highly processed foods, such as white bread, which contains only “empty calories” fortified with chemical additives.

At the present time, Ed is training six days per week on a split routine, working his chest, back, shoulders and triceps on Monday, Wednesday and Friday and his legs and biceps on Tuesday, Thursday and Saturday. He does several different exercises for each body part, working the individual muscle groups from various angles in order to achieve optimum muscular development and symmetry. As a powerlifter in the 181pound class, Ed has bench pressed 375, squatted with 465 and deadlifted 450 for a respectable 1290-pound total.

Corney is quite modest in spite of his many accomplishments and always conducts himself in a manner, which reflects credit upon him and the iron game. His quiet, friendly disposition is greatly admired by all who have had the pleasure of meeting Him in person. If excellence of character and outstanding muscular development are attributes of a Mr. America, then Ed Corney, this month’s MD cover man is truly a worthy contender for the title.

Worked daily with sit-ups, leg raises, side twists and side bends.

A profile of Ed from the December, 1970 issue of Muscular Development Magazine . . . his very first cover shot. 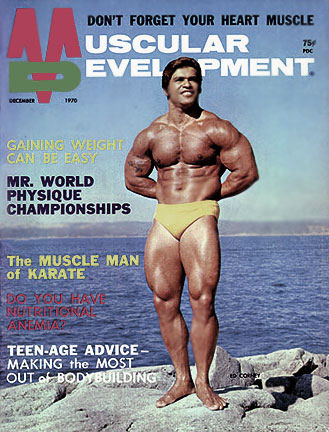